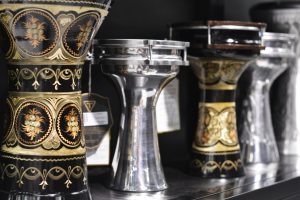 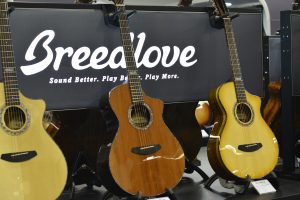 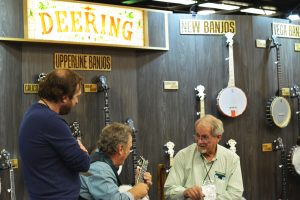 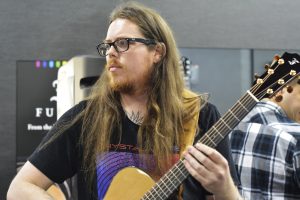 If you love to perform, write, sing, produce, mix, or listen to music, you need to attend the NAMM show. NAMM stands for National Association for Music Merchants. Don’t let the name put you off. It is a music convention of enormous opportunity. They have shows through the year in other cities, but the show I saw last weekend is based in Anaheim. Last year, 119,000 people attended and that was a 9% increase over the year before. There are 2,000 exhibitors. They have a great app to help you plan the most of your time and workshops Thursday-Sunday between 10 am and 6 pm. 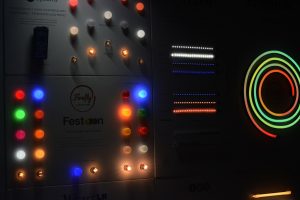 Inside the Anaheim Convention Center, you will find thousands (yes, thousands) of exhibits spread throughout 4 floors. The basement was for more organic and acoustic instruments. World instruments such as bazoukis and hang drums were also there. You could buy guitar parts from all the hardware and knobs, to fancy inlays and fret wire. You are encouraged to play all of them. I played a $5500 Breedlove and a $4000 Taylor that you’ll never see in Boise. So. Many. Ukuleles. Other floors have thousands of electric guitars, amps, drums, sound reinforcement, cables, software, mixers, and stage lights and effects. There was a fog machine that blew bubbles, and the fog would come out of them when they popped.

SPRK Music is a cool new platform that is kind of a “LinkdIn” for musicians. 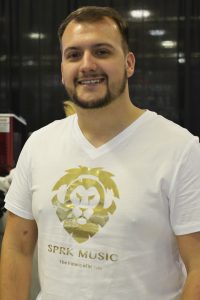 Music is everywhere. Even if you don’t play, you’ll hear all styles of music on stages throughout the convention and different rooms. Sarah McLachlan canceled last minute, which made me really sad. A progressive metal band took her place on the Yamaha Stage . “Animals as Leaders” is a really skilled and tight group! 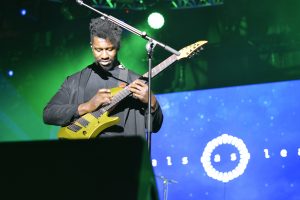 Somehow in the chaos, I was able to find my friend Eej. He and his buddy had a game of who could collect the most guitar picks at NAMM. He found 2 picks just while he was telling me about it!

This isn’t the guitar you grew up with. 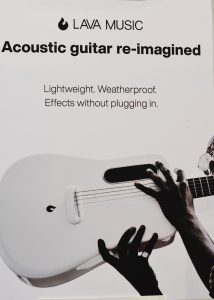 NAMM is both fun and exhausting. Leaving my motel, I heard some young guys saying their whole body was sore from walking. Another guy said he had never eaten so much to keep going. “I had to have 5 sandwiches yesterday!” I will personally need a few days to recover from this, and at the same time am hoping I can return next year.

There are many parts to NAMM. The nearby Hilton Hotel also has music stages and events. There were many business, musical, and technical workshops! This was my favorite part. 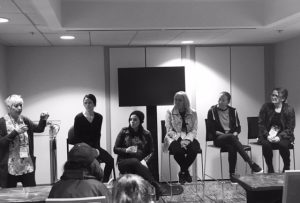 My very first panel was a mentoring class from AES (Audio Engineering Society), with different Soundgirls members. The first time I heard of Soundgirls was when St. Motel had a session. This was the first time I’d met another female engineer, (Jessica Berg), and she told me I had to belong to Soundgirls. They post great info throughout the year on recording techniques, job openings, and so much more. This workshop focused on dealing with discrimination while doing sound and production work. Founder Kerrie Keyes has been a sound engineer for Eddie Vedder of Pearl Jam for 27 years. She’s been through some things. My workplace is now very supportive, but several times a year we’ll have a session come through where a tour manager or sound guy will be completely unprofessional with me. People have said things to me that a co-worker could have been sued for. This panel shared dozens of similar experiences and had great advice. I’d say the NAMM show was 80% male for attendance. The first day a girl near me told her friend, “This is the first time anywhere I’ve seen a line for the MEN’S bathroom!” This Soundgirls event was really empowering for me, and a great way to kick off the first day by being surrounded by people just like me. They spoke of upcoming job opportunities to study for, like the whole field of RF sound. The FCC has taken many wireless frequencies away, and it’s a very growing area. One woman spoke of a recent NFL game where the whole game could have been shut down if they hadn’t made sure what frequencies were available for comms.

Sometimes artists bring their own mics to sessions. I’m not a fan, but understand sometimes they have to if it’s an endorsement. Stage microphones and broadcast microphones are not the same. Many people do not understand this. 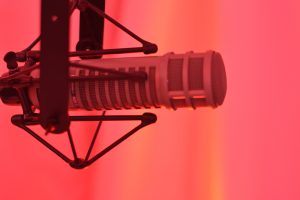 Finneas O’Connell is the brother of Billy Eilish. He led a great panel on producing, and I admire the sounds I’ve heard. Keep your eye on him. He’s been working with Selena Gomez, John Legend, and is working on a James Bond movie. Finneas joked about music he wrote when he was younger. The lyrics were, “I’ve been running for so long.” He joked, “What are you running from, you’re ELEVEN!” His favorite song regarding production, is “Mr. Brightside,” followed by “Bohemian Rhapsody.” When asked about people copying his music style, he seemed a bit annoyed and said that’s when it’s time to move forward and develop a fresh new style. He was one of many production engineers to recommend studying Pensado’s Place.

On another panel I went to, producers and attorneys talked about copyright law and sampling. They played some really interesting exampled of copyright claims.

On this one, Robin Thicke was the one do initiate a pre-emptive lawsuit! When asked what the difference was between these songs, producer Bob Clearmountain joked, “One of them is a great classic song, and the other is just…NOT.”

George Harrison lost this case even though he said he’d not heard the other song. It was based on “Subconscious Copying.”

This one is where it gets interesting, because the lawsuit is based on a musical arpeggio. This case outcome is still pending. The panel discussed how sometimes music has a style. I thought of Dubstep, or Trap. It’s tricky, and there are a lot of attorneys making money fighting both sides of it. One panel member asked, How many blues songs start with “I woke up this Mornin’?” What do you think of this one below? They are still in court fighting it.

There was a very cool workshop on Immersive Sound. This is the newly branded name for the competing version of Surround Sound. Fellow nerds, check it out HERE.  Not just for movies, this will be used in concert videos and much more. There will be Dolby Atmos receivers coming soon, and movies on Netflix. All producers complained that we should write Netflix because they are cutting off people’s credits! Things are changing fast and will continue to do so with this upcoming technology. One of my production heroes Bob Clearmountain had recorded a Bruce Springsteen audio track for a video in Bruce’s barn. He used 2 SM 58’s and 6 mics in the rafter of the barn for 5.1 sound.

There was much talk about this movie, it was Tom Petty’s last interview before he passed.

In a workshop for backup singers, I learned that SAG members in California can get a $10,000 concert gig to help pay for the $3,000 membership. If I could afford to live there, I would. The music, performing, education, and production opportunities are just unbelievable. 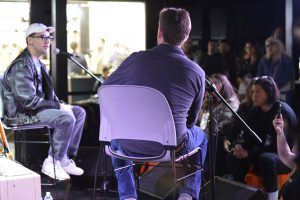 Jack Antonoff  of Fun and Bleachers did a production workshop and podcast.

A really powerful panel was “Equality and Beyond-Creating Gender Agnosticism in the Pro Audio Workplace.” The goal is to create awareness and equality, so someone can tell you that you’re a great engineer-not “great for a female” engineer. One of the women on the panel spoke of a former co-worker who is a very much adored TV star trying to kiss her at a hotel convention and then released her from her job when denied. She went to HR and they did nothing. She said she won’t go public because it won’t do any good. I felt angry because of all the other women this will happen to, and worse, because of her not going public. For the love of God, lady, watch “Bombshell!”

I came home wanting to learn more about Surround Sound and Immersive Audio. Why are so many films in mono? The answer is because it is easier. I am ready to do the experiment and have my mind blown with Binaural Audio. I am also crossing my fingers I can plan for attending NAMM for years to come.

One vendor noticed I was from Boise. She said, “Oh, you people hate us Californians, don’t you?” I told her hate was a strong word, we’re just not prepared for all of it and especially driving. I told her about our sad city bus schedule. A guy listening said, “I have 2 friends who just moved to Boise, and they don’t tell ANYBODY where they’re from!”

Outside of NAMM, many other events were happening. Check out our Red Carpet She Rocks Awards coverage, HERE.

Have questions or comments? Email me.